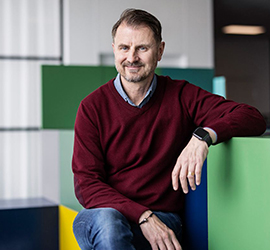 A residual product that is often wasted in electricity-intensive industries is low- and medium-grade heat. Energy that is simply not used. Until now. WA3RM develops and finances projects that make use of this surplus heat.

WA3RM’s solution is to buy residual heat from large, electricity-intensive industries to develop and finance bio-based operations on an industrial scale. And from the heat, which is mostly medium and low grade, WA3RM builds applications in the form of fish farms, greenhouses or other biological processes where the surplus heat can be used. The solution aims to harness the flow and create, for example, sustainable, circular food production. Every day of the year.

And WA3RM’s solution has been well received by industry. Interest is high and Sweden’s Minister for Economic Affairs, Karl-Petter Thorwaldsson, has said about the projects, “It could be the beginning of an industrial revolution in green industry”.

Michael Wiegert is co-founder of WA3RM with Fredrik Indebetou and Thomas Parker.

– The management of low and intermediate level residual heat is one of the major challenges facing industry. Not using such a valuable resource is unsustainable in the long run, and it costs money to get rid of it. In our projects, we take care of the heat and put it to use in a circular flow. The medium and low-grade heat is suitable for many different biological processes. In our first projects, we will use it to build modern greenhouses and fish farms. In doing so, we are contributing to increased self-sufficiency and more jobs, Michael Wiegert says.

Regenergy Frövi in Lindesberg municipality is one of WA3RM’s projects. The project will not only reduce large amounts of emissions but also run biological processes exclusively from recycled energy.

– We have signed a 20-year agreement with BillerudKorsnäs to cooperate with their paper mill in Frövi. For 20 years, we will be supplied with their surplus heat. This will then be channelled into large greenhouses and a unique cultivation plant for king prawns. We will recover a total of 40 GWH of energy and each year we will reduce carbon dioxide emissions by more than 12,500 tonnes. We expect to be able to produce around 8,000 tonnes of tomatoes and 4,000 tonnes of king prawns per year. The food production that is now emerging in Lindesberg is therefore quite extensive.

In the second half of 2023, the large greenhouses, which will be powered by residual heat, will be completed. Other greenhouses will take longer to get up and running, but WA3RM has already announced new projects. They will implement a similar operation in Gällivare based on residual flows from Hybrit technology. Only ten times bigger.

– The portfolio we are working on now comprises about 25 projects across the Nordic region. Our projects are becoming more relevant as it feels like the world is catching up. Authorities are demanding that the industry must have a credible plan on how to deal with excess heat. The penny has dropped. Today we work with prawn farms and greenhouses, but we are constantly exploring new uses.

And it’s clear that the WA3RMS project is having a major impact on industry, as well as Sweden’s development.

– Based on the portfolio we have today and extrapolating further, we will reduce Sweden’s emissions by 3%.

“We want to show that this is for real”

WA3RM’s project is fully in line with the climate targets set by Sweden. But at the same time, this will also contribute to an additional social benefit. Jobs.

– Lindesberg municipality wants to be at the forefront of sustainability and to be a showcase for the whole country. And in Frövi alone, 220 people will be working on a food production project that is unique of its kind. Our investment in Frövi is a shining example of how a municipality and industry can work together for a more sustainable society.

On 18-20 October, Scanautomatic will take place at the Swedish Exhibition & Congress Centre. And WA3RM will present its activities and projects on the Scanautomatic stage. While there, they hope to inspire industry about how currently unused resources can be harnessed to reduce climate impact while creating new, green jobs.

– I hope we give hope. Both the resources and the will are there. What is needed now is a recognition of the circular possibilities and acting on them. If we succeed with this scale of project, we will make a big impact. We want to show that this is for real and to call a halt to greenwashing. Financiers are looking for investments that are sustainable for real. And by investing in projects that actually make a difference, you can be a true capitalist and do a lot of good for the world at the same time, Michael concludes.

Michael will join WA3RM’s co-founders on the Scanautomatic stage, where they will present exciting case studies on how their projects are making, and will continue to make, a big difference to industry’s transition.

Get your free entrence card here »

You need to be signed in to add to your favorites.

Mail has been sent. Check your email for the reset password link. It can take up to 30 minutes before you receive the email.

Your account has been created. You can now begin to favorise.

As logged in, you get the opportunity to favor, for example, program items, exhibitors, etc. Create your own fair with exactly what you are interested in. My pages also contain your purchases, such as tickets. An account is also completely free.

The browser you are using is outdated. Update your browser

We use cookies to enhance your experience of our website, to monitor the use of our website and to support the marketing of our products and services.
I understand